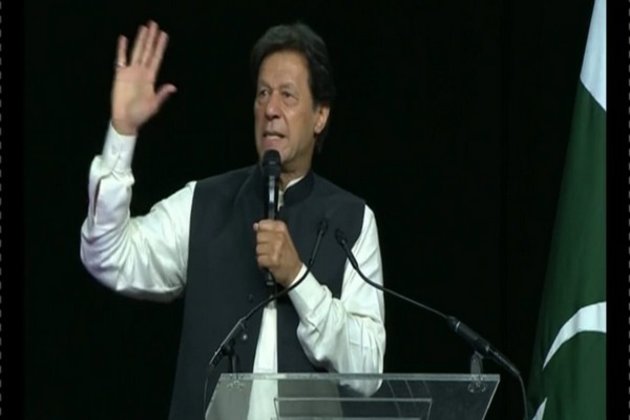 Washington [US], July 22 (ANI): Claiming that Nawaz Sharif eats home-made food in his air-conditioned jail with television in it, Pakistan Prime Minister Imran Khan here on Sunday said that he will ensure the "criminal" does not receive such treatment.

"Nawaz Sharif wants food from home in jail, he wants air conditioning in jail. But in a country where half the population has no air conditioning or tv, what kind of punishment would this be?," said Khan in a 50-minute speech televised by Samaa TV.

"I am going to go back and make sure there is no air conditioning or no tv for Nawaz Sharif who is a criminal. I know (PML-N leader) Maryam Bibi will make some noise, but I say to her, return the money. It's as simple as that," he added.

The 69-year-old former Prime Minister was convicted in the Al Azizia Steel Mills case and sentenced to seven years in jail. He is currently serving the sentence in Lahore's Kot Lakhpat jail.

Khan made these remarks while addressing the Pakistani diaspora during 'Jalsa' in Capital One Arena stadium, which was attended by 30,000 Pakistanis, despite the stadium capacity of 20,000.

Continuing his attack against Sharif, Khan alleged that the PML-N leader was "propped up" by a military dictator.

Targeting the other politicians, Khan said that the government has started seizing their undeclared properties. He claimed that these leaders have looted the country when they were in power.

"We have started seizing their undeclared properties; the billions they have taken overseas, we are in talks with other governments to bring that looted wealth back to Pakistan," he said.

"The ones who have been sitting in power and looting the country; but let me say it again, that despite the messages even from the outside that you are having sent to me, we will not let accountability go. On the other side, we have secular Bilawal Bhutto who has joined them. And then PML-N who have no idea what they themselves are have also joined them. They just want to hear three letters," he added.

Meanwhile, Khan is scheduled to meet US President Donald Trump at the White House tomorrow. He will be accompanied by Pakistan Army chief and Lieutenant General Hameed. (ANI)

The San Francisco 49ers are on their way to Miami to face the Kansas City Chiefs in Super Bowl LIV. ...

Grandson of JFK urges Republicans to break ranks with Trump

WASHINGTON - Key players in the impeachment trial of U.S. President Donald Trump and his defense argued sharply Sunday whether ...

SAN JOSE, California - Apple has added a new toggle that addresses privacy concerns around the location tracking feature on ...

DUBAI, UAE - The 800MW third phase of Dubai's solar park will be operational in April, the Dubai Electricity and ...

WASHINGTON, DC - The Pentagon on Thursday awarded more than half-a-billion dollars in defense contracts.With around 0.53 cents in every ...