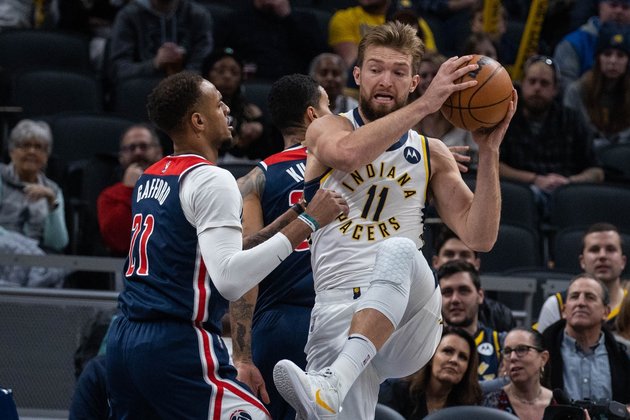 Domantas Sabonis scored a team-high 30 points to lead a balanced offensive effort as the Indiana Pacers snapped a four-game losing skid with a 116-110 win over the Washington Wizards on Monday in Indianapolis.

Sabonis grabbed 10 rebounds, shot 11 of 15 from the floor, went 8 of 8 from the free-throw line and dished six assists. He was one of six Pacers to score in double figures.

Indiana's Caris LeVert finished with 19 points for his best back-to-back scoring performances of the season. He posted a season-high 27 points in the Pacers' loss to the Miami Heat on Friday.

The Pacers also got 17 points, eight assists and six rebounds from Malcolm Brogdon. Chris Duarte contributed 13 points and four steals, and Jeremy Lamb had 10 points off the bench. Oshae Brissett came on in reserve to shoot 3 of 3 from 3-point range, and he wound up with 12 points and eight rebounds.

Balanced offense led Indiana to a double-digit-point lead for much of the night. A 28-18 first quarter set the Pacers on their way, and they extended the advantage to as many as 16 points before halftime.

A third-quarter surge pushed Indiana's lead to as many as 17 points before the Wizards responded with an 11-4 run to close the period.

Corey Kispert made both of his 3-point attempts en route to 10 points.

The Wizards closed the game on an 8-0 run, but could never bridge the early gap. The loss was Washington's third straight and fourth in five games. In each of the defeats, the Wizards dug double-digit-point holes in the first half and fell short in second-half rally attempts.